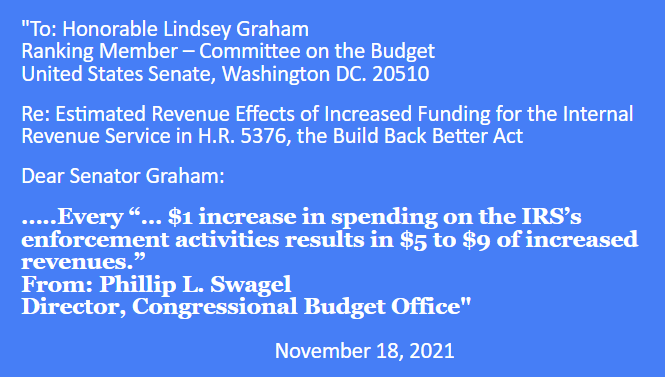 One in six dollars owed to the IRS are not being paid.[1]

An astonishing number of wealthy Americans do not pay the taxes they owe.  What is also astonishing is that some members of Congress appear to have that as a goal.  You will see their efforts play out over the next few weeks in the very scary debate about federal debt.  You will hear a lot of talk about our government running out of money. These politicians will focus on cutting federal spending rather than collecting money owed but not paid by tax cheats.  Cuts to Social Security and Medicaid/Medicare will be predicted unless we “balance the budget’ and “eliminate the deficit”. These statements are intentionally misleading.

According to Mr. Charles Rettig, the IRS Commissioner whose term expired two months ago, income lost due to lack of tax law enforcement amounts to around $1 trillion (with a “T”) each year.[2]  Tax dodgers have caused 2/3 of our annual average deficit each year between 2010 and 2020!

It is easy to protect vital government programs.  Just fund the IRS budget so they can hire people to catch the income tax cheaters. It has worked well in the past.

Our current financial mess has largely occurred because between 2010 and 2020 Congress cut the IRS law enforcement budget by  $1.8 billion dollars. As a result, the audit staff was reduced significantly. Most of those eliminated positions were higher-paid specialists from the divisions which focused on reviewing the tax returns of the wealthy.

Because their tax returns are simpler, the IRS audits the poorest families at five times the rate of higher earners.[6] Because Congress cut highly trained auditors’ positions, the loss of this talent resulted in only one out of a hundred millionaires being audited in 2022.[7] According to a May 29, 2020 report by the Treasury Inspector General, the Internal Revenue Service identified more than 879,415 known wealthy individuals who illegally did not file tax returns between 2014 and 2016.  These individuals owed at least $46 billion in taxes. Because of the congressional budget cuts, no one is going after them.

According to the 2021 Congressional Budget Office report, every dollar invested annually in the IRS results in $5-$9 in increased tax collections.[8]

Because North Carolina depends on the IRS to catch cheaters and some members of Congress have handcuffed the IRS tax law enforcement, we lose three times – less money in the federal pot to pass along to us, increased federal debt, and less money collected in North Carolina state taxes that we could have spent on law enforcement, education, health, and general welfare.

With fair tax law enforcement, the taxes paid by honest people would not rise.  The only new taxes collected would be from people breaking the law.

To be clear, I am a fiscal conservative.  I also do not like liars. These politicians  should be held to the oath used in court: “Tell the truth, the whole truth, and nothing but the truth.”