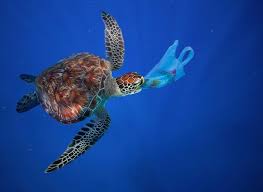 The average American eats the equivalent of a credit card-sized amount of plastic a week! [1]

According to a 2018 report released by The National Ocean Service (a part of the U.S, Department of Commerce) “about 300 million tons of plastic is produced globally each year”. Only about 10 percent of that is recycled. Of the plastic that is simply trashed, an estimated eight million tons ends up in the sea each year. [2][3] And it winds up in the flesh of the fish you eat.

Researchers at the National University of Ireland in Galway have been studying ocean fish in the North Atlantic to find out how much plastic is in their flesh. They discovered that “73 percent of 233 deep-sea fish” contain microplastic, or small plastic pieces less than 5 millimeters long. [4]

In addition to the decaying plastic trash floating around in the oceans, the accumulation of plastic into that tasty salmon you just ate could also have started with tiny beads that were added to toothpaste, makeup, and other similar product until congress outlawed adding plastic microbeads to such products back in 2017, [5]

While this regulation outlawed microplastics in toiletry products, they can still be used elsewhere. During use, these products are washed down the drain, passing through local sewage systems where they are not removed.

Recently, a plastics researcher was taking a break and poured himself a cup of tea. He looked at the tea bag after taking it out of the cup and noticed that it was shiny, apparently made in part with plastic! He took the tea bag back to his lab, examined it under a microscope, tested it, and his worst fears were confirmed – the plastic from the tea bag was melting into the tea, and he was drinking it. [6]

When I read that, I immediately went to my kitchen cabinet and pulled out all my boxes of tea – and a quick review showed shiny plastic in every teabag brand I had.

I hit the internet and began to search for brands of tea that did not use plastic. I found some, all European brands.

I have not been this angry in years.

Scientists trying to determine the health impact of all this plastic have a real challenge because most such medical studies compare two different populations – one with and one without whatever is being studied. In this case, the problem is so widespread around the world that they cannot find populations that do not already have plastics in their bodies!

The Pollution Detectives lends equipment, at no charge, to students and other concerned citizens to help “make the invisible visible.” Using our equipment, you can uncover lead in school drinking water, radon gas, mold, and several types of indoor air pollution. (Click here to find out how to borrow.)

We do not as yet have a tool that will detect plastics in your food or beverages, but we are actively hunting for one. Please reach out if you know of one and guide us.
Or support our efforts to make such a tool, and donate here.